A Weeks Worth of Kid Quirks 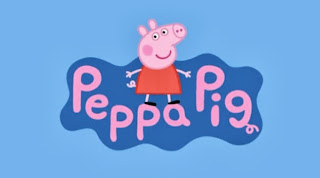 Boy have I got some quirky stories for you. This past week has been full of them. It all stems from my kids' obsession with Peppa Pig. Specifically, my three year old's. My (almost) two year old joins in on the quirkiness as she likes to follow her big sisters lead, or perhaps it's a payback since my oldest now refers to her younger sister as her "little brother Georgie"(Peppa's pig sibling). For those unfamiliar with "Peppa", she's a pig who speaks with a British accent and has a head which resembles an over-sized, 1970's style, pink blow dryer. It's a half hour cartoon which runs back to back from 5 to 6 pm. It really could not come on at a better time. My kids sit glued to the TV, allowing me time to start dinner without dealing with any serious casualties.

Recently, let's just say, I've developed a love/hate relationship with this silly Peppa Pig show. I LOVE that my kids will sit down on the couch without moving for a full hour. I HATE that my oldest now refers to me as "Mommy Pig", to my husband as "Daddy Pig", and that she'll often introduce herself to strangers by saying "Hi I'm Peppa pig, and this is my Mommy pig, my Daddy pig, and my little brother Georgie." I'm not sure if these so called strangers think that we are visiting from overseas since she now speaks with a British accent, but we're not. Also, my youngest is clearly a girl, and my husband and I are real live people, not pigs. 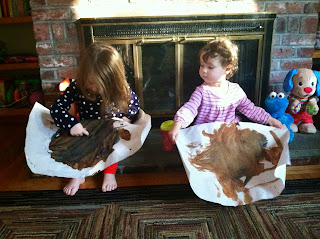 The other day during the car ride to preschool, my oldest busted out with a really loud "HI, I'M PEPPA PIG" followed by an equally loud pig snort. My youngest chimed in with a "NO! I'M PEPPA PIG", followed by more pig snorts. My oldest was floored by this and yelled "NO, YOU'RE MY LITTLE BROTHER GEORGIE!" This resulted in a very loud, dueling snort match for what is normally a very short car ride to school. That short car ride very well may have been the longest five minutes of my life.

On this same day, my oldest came home from school with two paintings she made. She was so excited to show them off and handed one over to my youngest. It was a nice break from the bickering over Peppa pig. This is what she said "Here Charlotte, I made this for you." My heart literally melted as she sat by our fireplace explaining to her younger sister that she made this extra picture to share with her. Then she said, "It's a giant steak. I made an extra one for you to eat since Mommy and Daddy don't feed us. That's what I said to my teachers at school." Just for the record: I feed my kids food.

Enjoy the blog? Please take a second to vote for us.