For as long as I can remember I've been punctual . . . maybe a little too punctual. I was the person that you could count on to show up when l said I would, if not earlier. You wouldn't know that though, because I'd most likely be driving around the block a few times to waste a couple minutes. I was actually given an award in high school for always being on time. Pretty cool, huh? Actually, pretty dorky when I think about it now. 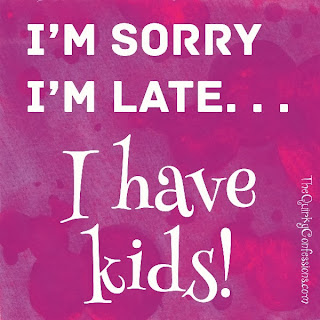 Back before my stay at home mom days, when I had a full time job, I had a bit of a commute and allowed myself plenty of extra time to pick up a coffee on my way in. I'd also calculate in the fear of bad traffic. Phhhhhttt, what a joke.  Most mornings I left before the birds were chirping, and I'd arrive to work a half hour early. I didn't get paid to be there early, so I'm not really sure why I continued to do this day after day. Probably because arriving early was far better than the sudden sense of "OH MY GOD, I'M GOING TO BE LATE." That happened once, during a blizzard, when most normal people would have just banged in with a personal or sick day. I wish I had calculated all those wasted half hours of being early for work into some sort of extra sleep category, 'cause maybe then I'd be a little more rested for what was to come . . . KIDS! See ya later, punctuality.

Don't get me wrong, I really try my best to be on time for things, it doesn't always happen though. Here are a few reasons why:
Therefore, I'm sorry I'm late . . . I have kids.

Enjoy the blog? Please take a second to vote for us.