A Week's Worth Of Funnies

To me there is nothing more comical than the way kids can perceive things. Just this week I posted the following on my personal Facebook page:

"Fact: I can't think of anyone that can make me laugh harder than my kids."

This statement is 100% true and I thought I'd share some of our laughs. 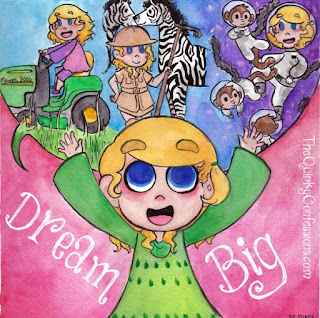 My oldest is always telling me what she wants to be when she "grows big like a mom or dad". Some of the occupations include:

Speaking of tails, whenever my oldest falls on her bottom she'll say "OH NO, I really hurt my tail." Despite me telling her she doesn't have a tail, she insists she does. She'll often ask my youngest if her tail is okay when she takes a tumble too.

My youngest was running laps around our kitchen island while yelling Woooohooo! Except it was coming out more like "Whooo Whooo!" My oldest approached her and said. "Charlotte, are you an owl? Is there an owl in your belly? Mommy, I think Charlotte ate an owl for breakfast."

My youngest loves to sing. Today we went to a garden center to pick out some new plants for our yard and she started singing that Pitbull and Christina song "woooo oooo ooooo O, I just want to feel this moment!" (She's just shy of 19 months.) Lanie also enjoys singing. She tends to make up her own songs. One of her favorites is "Charlotte, Charlotte, you're so cute almost as much as those zebra boots." (To the beat of Twinkle Twinkle Little Star.) She has a shoe fascination and still holds a bit of a grudge about the zebra print boots I didn't buy her.

When my kids really like something they are eating they'll start saying things like "MMM MMM these are so good and spicy!" You'd think I feed them jalapeños and Tabasco sauce for lunch but something as simple as a Popsicle can bring that phrase on.

At least I know that if the professions of zookeeper, landscaper, astronaut, or hairdresser for monkeys don't work out comedienne is a great back up plan. They always give me a good laugh. :)