Over the past few months it's been great watching my kids come out of their shells. As a mom of two girls who have both gone through a shy phase, particularly with men, it's nice to see them overcoming their fears. I'm not sure where the shyness came from since my husband and I are both outgoing and we encourage them to be friendly and polite to others. I've never been able to exactly pinpoint what causes their state of panic . . . beards, glasses, or simply someone that just comes off too strong. In their eyes if the wrong person approached either of them and said the wrong thing . . . WHOA. I'd have to prepare myself for a leg cling, headlock, and tears . . . lots of them. While I sympathize with their fears, I often tell them that there is no reason to be scared.  I'd tell them, so and so is just saying "Hi" to you, and it's nice to say "Hi" back. I think this soaked in . . . maybe a little too much. 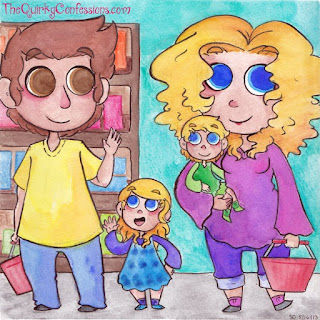 A couple of weeks ago we were out picking up a few groceries when my oldest stopped a man passing by who was wearing a yellow shirt. She looked up at him and yelled "Hey Mr. Man! Nice shirt! Yellow, yellow, kiss a fellow!" I smiled at the man, laughed under my breath, and kept walking. Though I was happy she actually started up a conversation with a random person on her own, I was also thinking to myself . . . oh gosh, what's going to come out of her mouth next? She better not ask this stranger for a kiss. She is known to do that. She did it not that long ago when I had thanked a cashier for giving me a 30% coupon on a purchase I had made. I got a discount, and my oldest wanted to thank her with a hug and a kiss. This actually did come in handy since the cashier slipped another 30% off coupon in my bag for a future purchase because she "could not handle the cuteness".

Now, with the nicer weather here, my kids often ask to have the car windows down. I have been allowing this, but it didn't take long to learn that if we are in a double lane stopped they are quick to yell out to the cars next to us. While Charlotte has taken a liking to saying "Hi Daddy" to old ladies (she calls everyone daddy), Lanie is quick to yell out "Hi! I'm Lanie! What's your name?". So far we've met a Doug, a Beth, and a Kathy. I've been telling her that it's nice to be friendly to people. It's also nice to introduce yourself to kids at the park but not so nice to yell out the window at people next to us. People need to focus on their driving, and having conversations with you could distract them.

I mean seriously, a conversation with my kid while driving could be just as serious as texting and driving . . . even if you are stopped. I really don't want to be the cause for the creation of a new law about having car windows down in stopped traffic because my kids like to strike up conversations with strangers. I nipped that in the bud, and I roll up the windows as we approach traffic lights . . . just in case.

Just today I had to drag my kids out of the grocery store. It's my husbands birthday so I wanted to get him a small ice cream cake. The cashier, an older woman, said "Oh, it must be someone's birthday!" Before I could even speak my youngest was waving and smiling and repeatedly saying "Hi Daddy" to her. Then my oldest went on to tell her "It's my Daddy's birthday today. Santa's mom has been working hard at the workshop and is going to bring him lots of presents!" Then she went on about how she was going to open the presents and eat his cake, and something else about Rudolph the Red Nosed Kangaroo. She even went as far as telling the cashier our address. I'm not sure if she wanted her to join in on the birthday festivities or what . . . I guess it's time for the "stranger danger" talk. I really hope I don't have any cashier party crashers making an appearance on my doorstep tonight.

If you've enjoyed my blog
please take a second to vote for us.
<< Just click this icon to register your vote! You can
vote once every 24 hours too! THANKS!
Posted by Unknown at 8:41 AM