I said it before and I'll say it again, when it comes to your kids it's always best to pick your battles wisely. I had far more battles than I'd like to fight this week starting with a trip to the mall for new fall clothes. 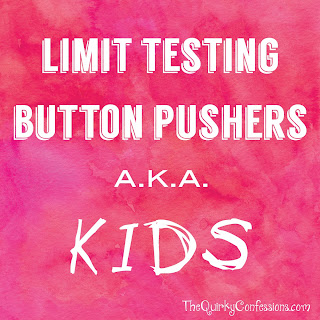 The car ride over consisted of my oldest not liking any song that came on the radio. "Who sings this song?" Well, since she's not a fan of your typical kids jams and Barney sing-alongs, or whatever the kids listen to these days, it was Katy Perry's new hit playing about about some eye of the tiger roaring or something. "This is NOT Katy Perry, and I DO NOT like this song." Ok fine, it is Katy Perry, but let's find something else. Three radio stations later and now my youngest chiming in that she doesn't like any of the songs, the radio was turned off. Now they are both yelling and screaming for songs. (I am the sucker that gave them one more chance, because frankly I could not handle the screaming in my ears while I was driving.) Dumb move, should have stuck to my guns . . . no radio.

BATTLE 1: MY Car, MY radio . . . I would sacrifice my song preferences if you actually liked the damn Wiggles, but you don't. So, therefore, no songs.

We got to our destination and it was a fresh start. They were both excited to get out of the car and start our adventure. This adventure consisted of my oldest having a meltdown about me not buying her a black sequined, woman's size 10 ball gown for her first day of school outfit. Oh, and my youngest stole a pair of purple glitter pants off a clothing rack and stuffed them in her stroller. She made it all the way to the car with them before me noticing. Prying those horrid glitter pants from her grip and returning them to the store was definitely not a puppies and rainbows kind of moment.

BATTLE 2: I am not spending $95 dollars on a Michael Kors ballgown for your first day of preschool outfit. (Even if it was on the clearance rack.) Also, I don't condone stealing. (Even if you're too young to know better.)

Later in the week my mother came over for a visit and we decided to take another venture out shopping to get my oldest new school clothes since my last trip was pretty unsuccessful. This was great, two sets of eyes are always better than one especially when taking my youngest, "Sticky Fingers", out for a trip to the mall. This trip was not much better. As my mother and I were searching the racks for a specific size,  my three year old decided to pull on a rack of jackets causing the whole display to come crashing down. Luckily, she was not hurt and it was just a big mess to clean up. She helped me pick up the coats, and attempted to assist me in putting the rack back in place. When I asked her to please step back with Nana and let me do it, she purposely pulled another jacket off the rack . . . and down they came, again. Is this fun? Do I look like I'm having fun? No, time to go.

We pushed our luck with one more stop on the way home. A children's clothing store in a nearby plaza. I would not have stopped, but she really needed clothes and there was a huge sign outside that read "Labor Day Sale". Those four letters, S A L E are a stay at home mom's dream. Desperate for some new clothes, we ventured in. A perfect, kid friendly atmosphere with a large Lego table and puzzles set up in the middle of the store. As my kids played, my mother and I found a few good buys. Our trip was successful, and it was time to go home. Pulling my kids away from the Lego table that they were so happily playing at was (insert sarcasm here) *just peachy*. I asked my mother to grab a hold of my youngest and I'd take the 40 pounder. Charlotte went to my mother fairly easy, while Lanie was beyond furious to leave. She started in with a little fuss about not wanting to leave, when a kind sales associate came over and offered her a Mickey Mouse sticker. The woman left to get the sticker, and I said to Lanie "As soon as she comes back, it's time to go." The fuss turned to a full fledged temper tantrum, and I scooped her up kicking and screaming. She was yelling as we left the store. "I don't like it when you scoop me, I'm not ice cream."

BATTLE 3: If the sticker attempt actually worked, I would have been thrilled. Props to the sales associate for trying, but I kind of had a hunch that this would be the outcome . . . you throw a fit like that, you don't get a sticker.

PS. Thanks for the scooping ice cream idea. That's just what I had for dinner after you kids went to bed.

Enjoy the blog? Please take a second to vote for us.
<< Click to vote once a day!