Kitchen Adventures and Other Indoor Activities 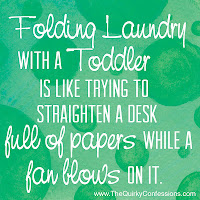 I have no fun tales of our adventures out and about this week because my oldest is sick. We have been laying low and trying to make the best of our indoor time. I'm not sure where she picked up her cold/fever. Pushing elevator buttons at the mall? Riding in the car carriage at the grocery store? Attempting to eat the dough that you play with at Bertucci’s? Or maybe it was from the kid hacking up a lung all over the slide at the play place. Who knows where she got it, but I know I'm not doing her or anyone else any favors by spreading the germs around town.

Spending the past couple of days in has not been so bad. We've been stripping the beds and washing anything that can be washed. Strangely enough laundry is a fun activity for my kids. Even though it takes about 3 1/2 hours to gather, wash, dry and fold 1 load of laundry. I try my best to be patient. They love to help and I highly encourage it. 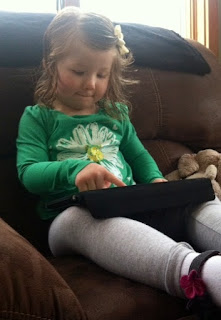 loves to help me make her bed in the morning. It's pretty funny to watch her attempt to fold blankets in between games of peek-a-boo. At the moment Lanie is very into helping Dan and I cook. She was kind of disappointed when I discouraged her from helping me make meatballs the other night due to her constant sneezing. Luckily Dan’s quick thinking defused the situation when he sat her up at the other end of the kitchen island with her own mixing bowl and spatula to pretend. That kept her entertained for a bit, then she opted to get down and cook in her own kitchen instead. She has stepped up from cooking the pretend food in her kitchen and has moved on to the real thing. I actually found a piece of real bacon in her play kitchen's frying pan the other day. Thankfully it was just from that morning’s breakfast. 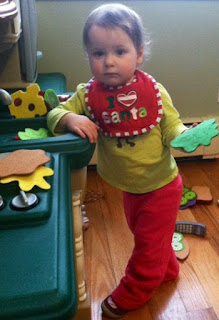 I get such a kick out of watching the girls play. will run over to the cabinet that is filled with newborn bibs and insist that I put one on her. She specifically likes the ones that read "I Love Santa" or "Babies first Christmas". (I should probably get rid of these since Christmas is long gone and I no longer have a newborn. She just really likes them. I swear, I am not a bib hoarder, I just have to find someone to pass them down to.) I'm not sure if she thinks these bibs are a smaller version of an apron or if this is some sort of toddler fashion statement. She just loves trotting around and cooking in her kitchen while wearing newborn bibs. Actually, she loves doing pretty much anything in these bibs. I just look at her and laugh . . . then she'll glare back at me. Clearly you do not mess with a girl and her bibs. Fortunately she lets me take them off when we go out in public without much of a struggle. 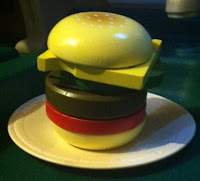 For the past couple of days I've watched Lanie go over to the kitchen and put a lot of the play food in her pots and pans then yell out what sounds like "HMMM BOOGER". I quickly run over with the box of tissues thinking she needs to wipe her nose and she looks at me like I'm crazy. I finally caught on today, as to what she was saying, when I heard that exact phrase coming from the iPad. She managed to change a setting on one of her matching games to French. HMMM BOOGER = Hamburger! I learn something new everyday, and so does she since I think she has been saying a few other words that I have brushed off as gibberish. For all I know she could be swearing at me in French and I would have no clue. Note to self: Time to set up those parental controls. (I give it a month before she can crack them.)