My Job as Referee 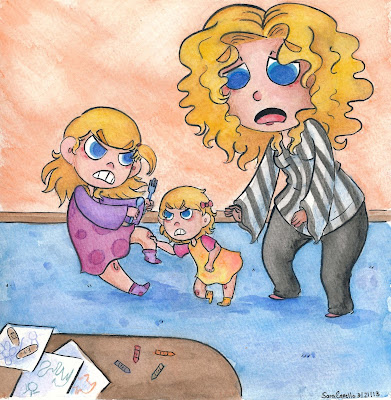 Having my kids fairly close together has certainly had it's perks. With Lanie being 2.9 and Charlotte being 16 months, a mere 16 1/2 months separates them. They laugh together, play together, read books together . . . they are best friends . . . and sometimes worst enemies.

Round 1: While playing a game of run around the kitchen island my youngest slips causing the rug underneath the kitchen sink to slide out of place. My oldest yells "OH NO, you tell that rug you are sorry! You hurt it. That makes me and the rug very sad." My youngest can sense her harsh tone and glares at her while I try to explain to Lanie that it's just a rug and it's really okay. I say "instead of worrying about the rug let's make sure is okay". I probably should have been more focused on teaching them not to run in the house, but who am I kidding . . . I'm no Carol Brady. "Mom always said don't play ball in the house" as Marcia gets hit in the face with a football. It's been a long winter so in my opinion occasional laps around the kitchen island and balls in the house are fine by me . . . well, as long as they are nerf balls.

Round 2: My oldest is fuming that my youngest will not say sorry to the rug. She grabs some plastic silverware out of her play kitchen and proceeds to bang on 's head saying "If you don't say sorry I'm going to turn your head into a drum. Look Mommy, 's head is a bass drum!" I yell out "LANIE, NO. Now you need to say sorry to . Banging on peoples heads with silverware is not okay." Before I could get over there and grab the plastic spoons from her hands my youngest grabs her by the knees and over she goes. I'm not sure where this behavior came from, but trust me when I say I want to be raising young ladies, NOT WWF wrestlers.

While I question how Lanie even knows what a bass drum is and how learned the armbar legsweep, I get their activity table out along with some paper and stickers. It was clear to me that they really needed some time to sit down and relax. The stickers were such a big hit that when we ran out I was just as disappointed as they were. During my unsuccessful attempt to find more I had the bright idea of using band-aids . . . they stick, right? So I gave them each two band-aids and said "after we stick these, that's it". I figured that the process of unwrapping them would buy me a bit of time.

Round 3: My oldest unwrapped her band-aids quickly and stuck them on her paper. My youngest chose not to open hers at all and was content just holding them. That did not bode well with my oldest. She could not understand why did not want to open her band-aids and attempted to "help her" by grabbing them away. And there they go . . . the screams. The screeches from both of them that are just SO loud. (For those that have read my previous blogs you may remember they had gotten the label of "The Screeching Sisters" at the play place.) The screeches then turned into laughs and I had a instant headache. As quickly as they were worst enemies they were BFF's all over again.

Arguments about saying sorry to rugs, plastic spoons, and band-aids are probably pretty minor in the big picture. Someday I'll most likely be breaking up fights over using the phone, clothes and stealing boyfriends . . . I can only imagine what those screams are going to sound like.