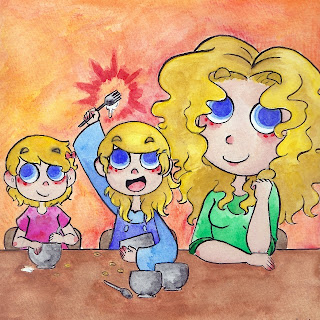 Over time I've learned to pick my battles wisely. Because, let's be honest, there's the logical way of doing things, and then there is the toddler/kid way. It may not always be the same approach that you or I would take but if it works for them, then so be it.  Just this morning I found myself sitting at the kitchen table when my oldest was on the verge of a mini meltdown because I would not give her a fork to eat her cheerios with. My first thought was, I'm not getting up to get you a fork when you have a spoon right in front of you. Then I thought to myself, do I really want to go there right now?  Do I really want to start the day off with an argument about utensils? Heck, I'm happy she uses utensils and honestly what difference does it make if she uses a fork or spoon? I'd give her chop sticks if it actually meant she was going to eat what was in front of her. Needless to say, she ate a record breaking 3 bowls of cereal . . . with a fork.

The other day my husband and I were driving when we passed an area with cows. My youngest was in the backseat saying "Mooooo, Cow"  while my oldest glanced out the window and said "Oh wow! Look at all the elephants!" We laughed, and I said "No Lanie, those are actually cows." She said "No, they are elephants." The same thing happened later when we saw some deer in our backyard. Despite my telling her three times that they were deer, she insisted that they were kangaroos. I probably could have sat there for a half hour or more trying to convince her that they were deer and not kangaroos. Not worth the battle.

My kids have also changed the cats name to "Joe". Apparently he'll respond to anything, so it really doesn't matter I guess. I do remind them that his "real" name is Jasper. They don't seem to care, and neither does he. Whatever . . . I'm not going to argue about it.

There are battles that I will fight though. One is nap time.  My kids get up at the crack of dawn every day, and shortly after noon time it shows. One will go down without a fuss, while the other tends to be a bit of a challenge. She will "rest" in her room for about an hour. By "rest" I mean that I'm usually serenaded by various hits like Wheels On The Bus, Ring Around the Rosie, or anything by P!NK and Fun. As long as I can fit a shower in and she doesn't wake up her sister with her loud singing I don't really care.

All the battles I pick to fight are worth the struggle. I just don't sweat the small stuff.