Ages and Stages and Words With Kids

As of this Thursday I will no longer have two toddlers. I can officially up the ranks to one toddler and one preschooler in our household. This means a whole new level of fun. This also means I really need to step up my game.

Over years and years of working with kids I've learned to never ask a child anything in question form. If you do, you're most likely setting yourself up for that favorite word . . . "NO"! I'll admit, I must be some sort of slacker when it comes to practicing what I preach. I hear that word a lot. Even if I ask something like "Do you want to go to the park?" I'll often get a big, fat "NO". Making a statement like "Come on, lets go to the park!", usually has a better effect. I've also learned that giving kids choices ends up with better results as well. "Do you want to wear this outfit or this outfit?" I'll usually get my way with the clothes, but at times an extra accessory might be thrown in the mix. For example: A summer sundress with a winter hat. You know what, you want to wear a winter hat in 95 degree weather . . . fine. Some choices have consequences though, and I usually get my way as soon as the first drop of sweat rolls down her face. Remember picking your battles is key. Plus we have AC, or as my oldest calls it . . . ABC. If we were heading out somewhere I may be inclined to actually take a stab at that battle. 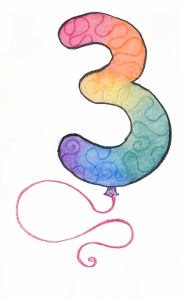 Now that I have a (almost) three year old running around the house, I have to be very cautious when it comes to wording my statements as well. This past Sunday we celebrated her birthday with a family party. The night before I had taken her to a party shop to pick out some balloons. I said to her on the car ride over that she could pick out any balloon that she wanted. She was very excited. She ran right over to the balloon section and within seconds had two favorites. . . The first was a large, black balloon that read "Over The Hill".  The second was a big pink playboy bunny. My thoughts: Crap. I told her she could pick out ANYTHING. Whoops. Now I'm not one to go back on my word, however, my first thought was . . . your party is at our house, not Hugh Heffner's mansion. My second thought was . . . my plan is to throw a party geared more towards turning three, not three going on senior citizen. Thankfully, I was able to direct her attention to a large number three and a big yellow smiley face wearing a party hat. It only took about 15 minutes to convince her that those were just as good. I was lucky.

I've also been saying things to her like "You're so big! I can't believe you're turning three!" Well that came back to haunt me too. This was one of our recent breakfast conversations . . .

Lanie: *rolls eyes* "Channel 7 Pete guy who tells me if its a pool day."

(Pete Bouchard is a local weather reporter that she has caught on the morning news a few times.)

Me: "Well, news is for big people. I think Arthur is a better choice."

I'll bet if I looked up "age three" in The Parent Handbook it would read as follows: 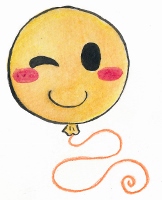 Welcome to 36 months! The age that talking back is the norm, and they are too smart for their own good. You thought "NO" was bad. Good luck! ;-)

<< Just click this icon to register your vote! You can
vote once every 24 hours too! THANKS!
Posted by Unknown at 2:36 PM